What’s in the Liberal Democrats’ manifesto about careers

When I reviewed the Conservative manifesto I said that it was a weighty document. However Russell from the Secondary CEIAG blog pointed out that it was nothing when compared to the 158 pager that the Liberal Democrats have produced.

So following on from my reviews of the Conservative and Labour manifestos, today I tackle the Liberal Democrats.

One might argue that there is little point in looking at the Liberal Democrats manifesto as they stuck to so little of what was in their last manifesto. However, I think that the manifestos remain useful as indicators of what the parties care about and the direction that their thinking is moving in. This is important as it is pretty likely that the Lib Dems will end up in government one way or another after the next election even though the May 2015 website is currently only predicting them 25 seats.

In Stronger Economy. Fairer Society. Opportunity for Everyone the Lib Dems try and set out their vision for the country. The headlines try and square the circle with promises of tax cuts, fiscal restraint and increased public spending in the things that matter. They even offer this handy graphic to hammer home that they are the best of both worlds. 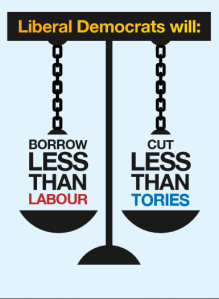 Much of this is very similar to the other two parties that I’ve looked at so far, but there is also an emphasis on green policies and on that old Lib Dem favourite constitutional reform.

Moving to the more careers specific content in the manifesto. There is some focus on increasing employment levels with a focus on supporting certain key industries like tourism and high tech. The party will continue to develop the Universal Credit approach to benefits and the Work Programme for unemployed adults. So basically more of the same combination of utilitarian career support and benefit conditionality. But, there is also an interesting paragraph on the use of sanctions by the Jobcentre which shows that there are some attempts to moderate and humanise the way in which the current system is working.

With reference to young people there is an interesting paragraph.

Liberal Democrats will protect young people’s entitlements to the welfare safety net, while getting them the help they need to get their first job. That means doubling the number of businesses that hire apprentices. It also means providing support that has been proven to work, like work experience placements that help them get a first foot on the career ladder. These placements should be tailored for those with disabilities or mental health problems and those with parental responsibilities and we will work to expand the availability of placements into new sectors including manufacturing, science and technology.

Which is basically throwing everything that they’ve got at youth unemployment. I agree with most of this , but without any clarity about the infrastructure that can provide this kind of career support it is a bit of an empty promise.

On education they promise to protect school budgets, improve standards and increase apprenticeships. These have become the educational platitudes of this election with all of the main parties promising this without any clarity about how it can be done. Although to be fair the Lib Dems 156 page manifesto does offer scope for a bit more detail. Buried in this detail is a bit more about encouraging education/employer links, but this looks very much like a continuation of current policy with little new thinking and no new resource. There is some stuff about improving PSHE, but career education is not included in the list of what this will cover (unlike first aid). There is also a throw away comment on improving careers advice in schools and colleges, but again without any details.

The manifesto offers little new in the higher education sector but devotes a bit of space to apprenticeships. The most substantial thing here is the promise to increase the amount of funding for employers to take on apprentices.

Despite its length the Lib Dem manifesto still manages to offer up little but rhetoric in relation to career issues. In general it seems to endorse the status quo in the area and provides few ideas about how it might be developed or improved.