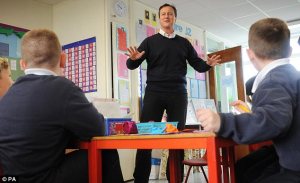 The dust has now started to settle on the election and so we need to start to work out what it all really means. As ever Russell from the Secondary CEIAG blog has been quicker off the mark with his analysis of the situation than me. But it has got me thinking. What will happen to career guidance under this Conservative government?

Eagle eyed readers of this blog might have spotted that on the whole I am not a Conservative supporter. However, it is important to recognise that in the past career guidance has flourished under Conservative Governments and that its recent history under the Coalition may not necessarily be repeated. Tony Watts argued that career guidance offers three main things to “new right” parties like the Conservatives. Firstly he discusses how guidance can be used as a form of social control, helping to foster pro-social (or from a more critical position, pro-government) attitudes and organising people into the positions where they are most needed in society e.g. helping to persuade people to come off of benefits and take low paid work. Secondly he argues that in marketised learning systems and labour markets guidance can be an important facilitator which can make these markets work effectively e.g. by helping people to understand the student loan system. Thirdly he argues that it is possible to marketise guidance itself and turn it into another private commodity that can be bought and sold (and therefore becomes something that the state does not need to provide).

Watts’ three roles of guidance within “new right” thinking remain very useful. I would expect all of them to feature to some extent in the next five years of guidance’s history.

As I wrote during the election campaign the Conservative manifesto offers us few clues about what the party has planned for career guidance. However, recent history suggests some reasons for cautious optimism. The party has largely kept faith with the National Careers Service although the future of this is likely to be influenced by who ends up in charge of DBIS and who ends up as the skills minister. The reappointment of Nicki Morgan as Education Secretary presumably means that the new careers company will continue to be established and that the positive direction shown in the recent statutory guidance will be maintained.

On the other hand there are a number of more onerous signs. Writing on the Conversation, Chris Husbands of the Institute of Education outlines a number of concerns about the future education policy under the Conservatives. In particular he warns of a funding squeeze, an increase in punitive accountability, a narrowing curriculum and continued reform of institutions (e.g. more free schools). Richard Vaughan in the TES makes a number of similar points, highlighting funding, accountability, testing, the narrowing of the curriculum and suggesting that the institutional reform will return more selection to the system. None of this is particularly fertile ground for school based career education and guidance which runs the risk of becoming a casualty to the reduction in funding and curriculum space.

Outside of schools the promised public sector cuts threaten the National Careers Service as well as the activities other remaining homes e.g. in further education, the welfare to work world, local authorities and initiatives like Union Learn. Unless career guidance is clearly prioritised it seems likely that it will be further eroded in some or all of these places over the next five years.

So all of this suggests a mixed picture. There are some green shoots, but also the threat of the activity being uprooted altogether. What is clear is that the Conservatives do not have a plan for career guidance, nor do they, at present have a clear use for it. The job of those of us who care about the activity is to try and make sure that they start to hear some strong arguments about why career guidance is important pretty soon!